In May 2021, Palestinian activists took on social media to voice out the ethnic cleansing that was happening in Sheikh Jarrah. They used social media as a mean of resistance against Israelis who were taking their homes by force. Their voice was loud enough that it caught the attention of international news media outlets. Sheikh Jarrah landed on the agenda of western media who framed the news in favor of Zionists despite the violence used by the Israeli forces against the Palestinian families in the neighborhood.

This scenario is not new. In fact, it is an ongoing process that happened 73 years ago: “Al Nakba”, or “the disaster. In 1948, Zionist militias violently massacred unarmed Palestinians and expelled around 700,000 from their homes, occupying around 78% of the land in Palestine.

Despite the efforts of Palestinian activists Muna El Kurd and her brother Mohamad El Kurd, who took on citizen journalism to communicate to the world the expulsion of their families from their neighborhood in Sheikh Jarrah, Western media outlets played a big role in attenuating the violence of the illegal settlers or by giving a “reason” to their action against Palestinian families. This framing process is back up by political support to the settlers. The US, Great Britain and many other countries has been strong supporters of the Zionists. This political lobbying is reflected by their coverage of the Palestinian struggle.

Framing is a theoretical framework used to analyze how media present an information to their audience. Many scholars demonstrated how the use of certain terms or sentences in the media can influence the reader’s opinion about a certain topic. The language choice and the selection of certain information and the omission of other aspect of the reporting also contributes to media frames. Therefore, the headlines of their news media outlets are one aspect of how the news was framed. It is the first thing read by the audience and the one sentence that drives the reader to either read the full article or ignore it.

Falastin and Jad represent two people from our community. Let’s see what they have to say… 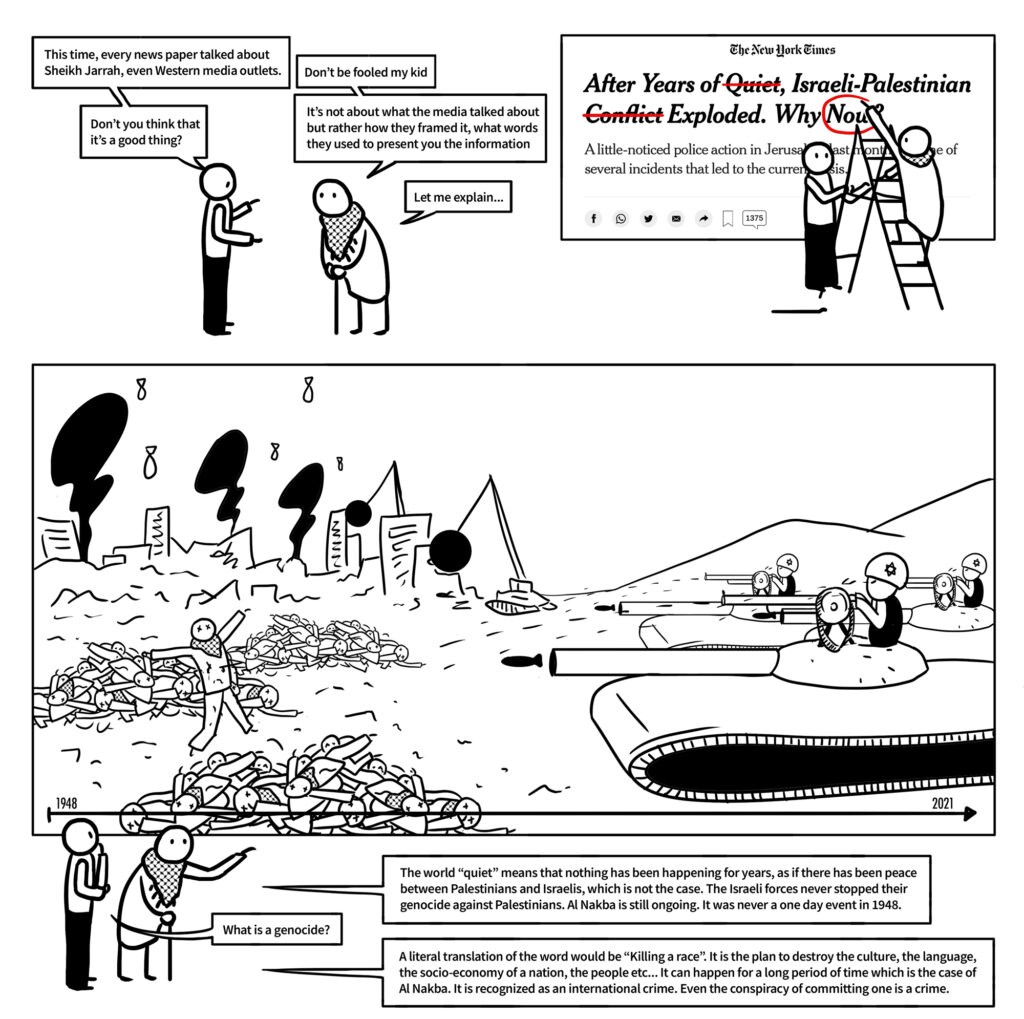 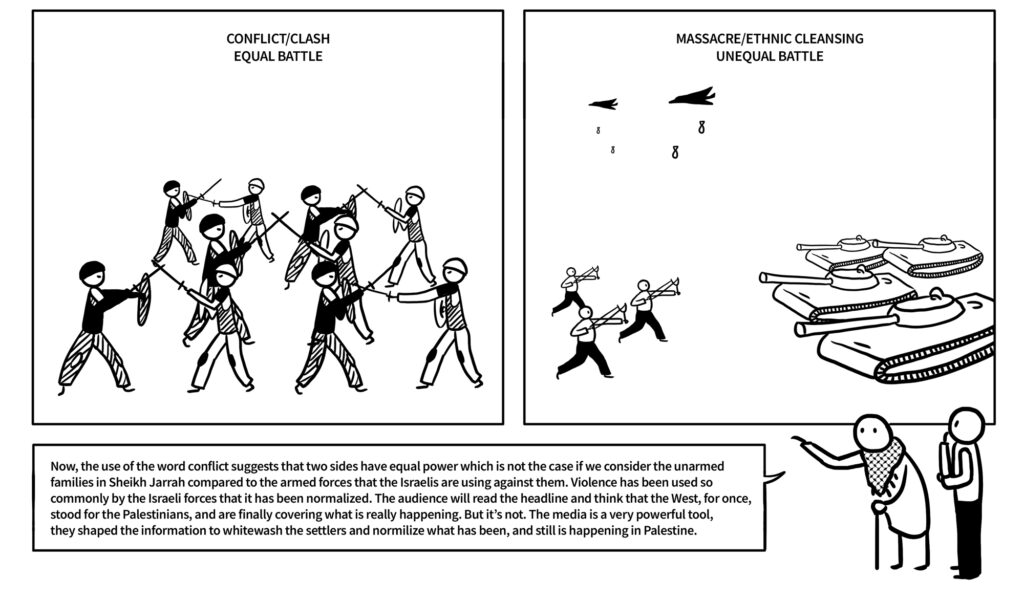 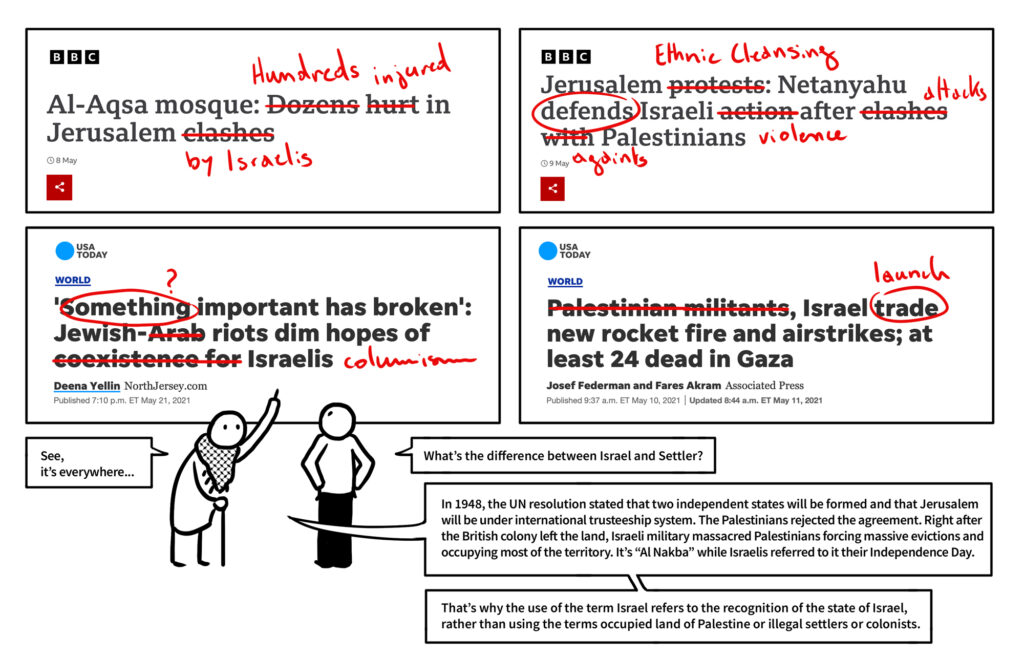 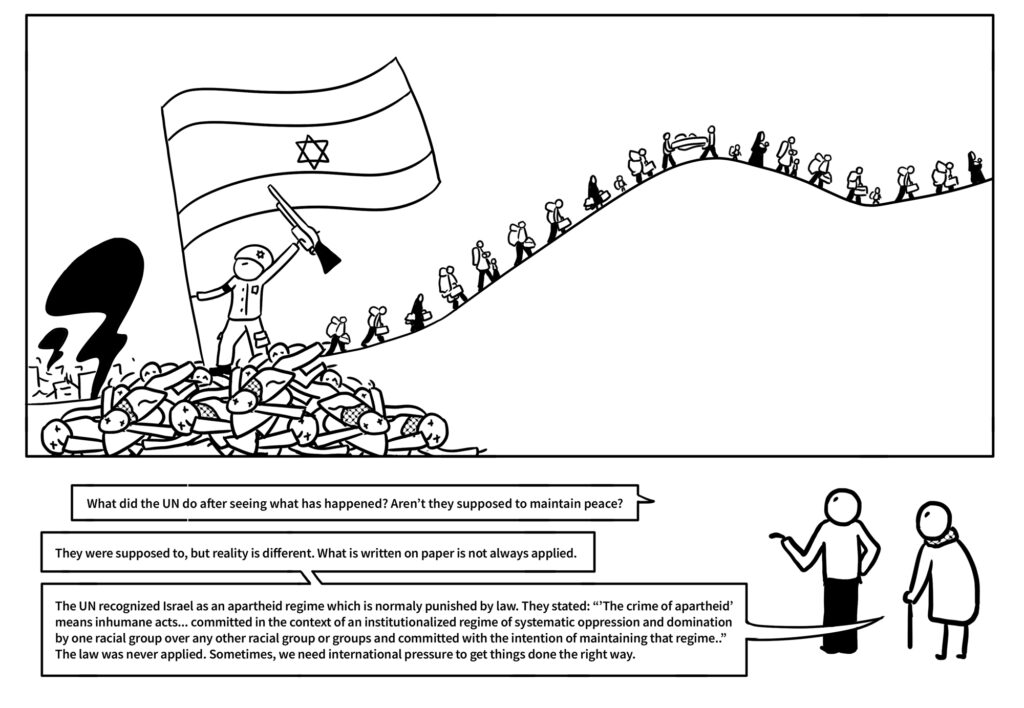 For decades now, Western media portrayed Arab people as terrorists, bad guys. The Palestinian cause is no different. A number of scholars demonstrated the bias coverage of the war against Palestinians and the results show that western media are more sympathetic to the Israeli settlers. As Falastin demonstrated, the framing of Sheikh Jarrah is deeply rooted in the history of Palestine. What happened in May 2021, is a reflection of what happened in May 1948. How media is dealing with what is happening in Palestine is a common narrative that will always support Zionists unless the world decides to get together and scream out loud that Palestine is human right issue which is worth their attention.

It is important for the readers like Jad, to expand their knowledge about how media present an information in order to become critical consumers of news, aware of news frames, bias, and the socio-economic and political games that the mainstream nations are playing using their favorite toy, the most influential of all: Media.